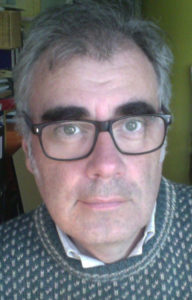 Ian MacQuillin MInstF(Dip) is the director of the international fundraising think tank Rogare, which he founded in 2014. Rogare aims to help fundraisers better use theory and evidence in by translating academic ideas into professional practice and building fundraising’s knowledge base.
He’s recognised as a leading thinker on fundraising ethics, having developed a new theory of fundraising ethics that seeks to balance fundraisers’ duties to both their donors and beneficiaries.
Ian edits the Critical Fundraising blog and runs and moderates the Critical Fundraising Forum on Facebook, which has more that 1,1000 critically-minded fundraisers from all over the world. He writes a regular column for Third Sector magazine and regularly contributes to the specialist charity media around the world. Ian is also an in-demand speaker on the global fundraising conference circuit.
He has worked in the fundraising sector since 2001, as editor of the leading trade magazine Professional Fundraising, account director at specialist fundraising sector PR agency TurnerPR, and as head of communications at the Public Fundraising Regulatory Association.