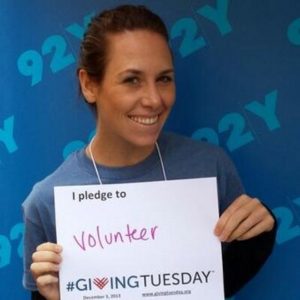 A couple Tuesdays ago, on November 27th, something remarkable happened. People and organizations around the world came together for one common purpose: to give.

Launched in 2012 by the 92nd Street Y, a community and cultural center in New York, USA, #GivingTuesday is a global movement that celebrates generosity and encourages people to donate their time, money, goods, and more to charity. On November 27th, the world celebrated #GivingTuesday by sharing messages of kindness and support in multiple languages and in nearly every country and territory on Earth. From free pediatric health clinics in Venezuela to community giving hubs throughout Singapore, people came out to support their communities and to join others in giving back.

In the United States alone, over $380 million dollars was donated online within the 24 hours of #GivingTuesday (with results still coming in). Nearly 4 million donations were made on the day, with many people giving to more than one cause or organization. In Russia, we are learning of similar results, where platforms are reporting two times the amount of donations on #GivingTuesday then on other days of the year. In India, over ₹88 million rupees were donated to 8,700+ participating NGOs. And it’s still early – many more results from campaigns and countries around the world will be announced in the coming weeks.

#GivingTuesday is also about experimentation and learning. Over the past seven years, we’ve had a front row seat to seeing how technology is influencing giving trends and behaviors, as new platforms like Facebook and YouTube make it easier for people to donate directly through their social network and share with their peers. We are also working with leaders in each country to learn more about giving behaviours (both online and offline) on a national and regional level. Our Data Collaborative is currently helping collect #GivingTuesday data from platforms across countries. Everything we learn we will share to enhance the capacity of the sector.

Lastly, as we look more deeply into the data, trends, and events of the day, we are constantly reminded that the heart of this movement is the people giving back. This year, and as part of #GivingTuesday, over a dozen countries have launched #MyGivingStory, a storytelling campaign to encourage people to share how they give and why. From China to Brazil, Poland to Tanzania, #GivingTuesday is igniting a bigger conversation about generosity and what that means in our respective cultures, and as part of our shared humanity.

As we plan for December 3, 2019 – next year’s #GivingTuesday – we are excited to learn more about how #GivingTuesday is celebrated around the world and to grow our community of leaders, givers, and do-gooders. We are thrilled to have Sweden as part of the movement and look forward to hearing more of the inspiring stories and actions from #GivingTuesdaySweden.