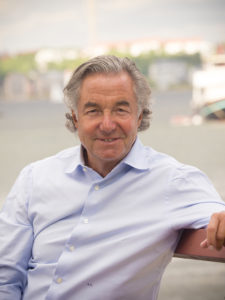 Larry Leksell, with a MBA in 1974 and a Ph.D. degree in Business Administration 1981, both degrees received from the Stockholm School of Economics. Laurent is Chairman of the Board & Founder of Elekta AB (publ), as well as having served as its CEO from its foundation in 1972 until 2005. Besides founding Elekta AB 1972, Laurent has been a visiting scholar at The Harvard Business School, faculty member of the Swedish Institute of Management, the Stockholm School of Economics (where he is also Chairman) and a visiting Professor at INSEAD, France as well as partner and founder of an international management consulting firm.

In addition to this, Laurent is Chairman and founder of Leksell Social Venture, a non-profit financing company for social impact investing and financing of social entrepreneurs in Sweden – aiming to improve society through financing, idea development and networking with private, public and nonprofit actors. Amongst other things, Leksell Social Ventures launched Sweden’s first Social Impact Bond in 2016.

Laurent has received numerous awards among others Entrepreneur of the Year Award in Sweden:

Larry will be participate in the seminary, who can save the world?